We spend the night, August 1, in the Youth Hostel in Limburg. When we arrive we learn (by way of a sign on the window) that the office will not open again until 5 PM. (I can't say how familiar it has become to see a sign on a window, "Not here, will be back later").
The location is again on top of a mountain. It seems that this particular youth hostel caters to groups of athletic young people as there is a ball field and other athletic equipment in view. I learn that a team of young bicyclers are on their way. A woman who is part of the group waits by the van that carries the luggage. After we introduce ourselves to each other, she asks about our activities and shows an interest when I tell her the subject of our tour is euthanasia.

Hagai is delighted to find an internet cafe and plans to return. Elin and Joanna visit a church. We return to the hostel in time for dinner which is rather tasty and good. While the others go back to town, I go to sleep early. What a treat to open the windows wide, to have a quilt that gets totally folded in a sheet and curl up!

On Monday morning, we have breakfast and prepare for a long drive to a village on the border of where East Germany met West Germany, and where Werner Fuss is buried. Werner Fuss is an ex-patient who was active in Rene's group, and for whom the group memorializes with plans to name their rights center in honor of him.

The name Werner Fuss has been mentioned frequently thoughout the time of my visit. Rene presents him as a kind of folk hero, a symbol of differentness and defiance, but a person difficult to describe. What he seems most known for is his escapes from hospitals and across the border where neither side wanted him and returned him. Rene tells us it is highly unlikely that a person would escape the Eastern border to the West and be returned back, let alone be able to avoid land mines. But Asia suggests avoiding mine fields was not so difficult. "The villagers all knew where the mine fields were," she said.

Werner was described as being an oddity to look at. Small, (not a midget or dwarf we all decide), but small in stature, with a hip deformity. He was intentionally unkempt, long hair, clothing unwashed and unchanged. His appearance was dirty. While some might have thought him illiterate, and even unable to speak, Rene states he was very clever, and perfectly capable of speaking when he wanted to. He was a member of their ex-patient group, and was the biggest seller of their newsletters. Rene speaks of him with fondness, and with respect. "Werner had a great sense of humor," he said. Always laughing!

Rene says that someone should write a book about him, or that a screenplay should be made, a movie. It would require someone to do research. The family members that still live in the village do not really want to discuss him. It was a struggle even to get him buried in the gravesite in his town near other relatives, though the mayor did come to commemorate along with others in their group, not family members, however. "Werner," he said, "would be remembered not only as an escape artist, but for the ability to survive at all odds in the community." He refused the label of "patient." Werner was what he was, whether people liked him or not.

After stopping at a glider museum and resort, which was a major attraction with lots of folks gathered, we continue to travel in the direction of the village where Werner is buried to pay our respect and honor him. It is hot and our bodies do not sit well in the car, arms and legs beg for room; we have little tantrums and are "cranky"a new word for the group that they now associate with hunger. But you don't have to be hungry to be cranky," I explain. "You only have to be annoyed." 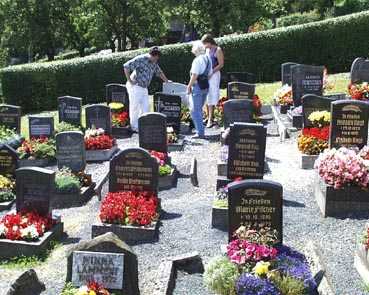 The grave site at Andenhausen

When we finally arrive, first in the village, and then at the gravesite, we are happy again laden with flowers after stopping at a nursery, each of us having chosen a special flower; a sunflower from me, fern from Elin, small green plant from Asia, a vine from Hagai, and a red foxglove from Rene. We add them to our laps and are happy to take them up to the cemetery. Another beautiful sunny spot on top of a mountain. The gravesites all have small flower plots in front of them. Not a flower wilted in the whole graveyard, all of them fresh and bright. Werner had the only headstone with a picture of himself. He also has the only white headstone out of all of the stones in the graveyard. Hagai relates this observation to Rene, who states that "while he had been the "black sheep" of the family, he now became the "white sheep" of the family", after his death. His garden is full of blue blazer and pink geraniums which means that we must squeeze our flower gifts in his already crowded plot. A few did not fit. We sit quietly for a long time thinking separate thoughts looking out over miles of fields while once again a church bell chimes.

Before leaving the gravesite, we wrap a ribbon around his grave that is signed by all of us, labeled, "Freedom From Fear." We take a group picture. "Say cheese," someone says. I say, "Say sex," which some think vulgar. Rene reminds us that Werner had a sense of humor.


On the way back to Berlin, we talk some more about Werner, and give him a title, "Bandit from Captivity." But nerves continue to fray. Perhaps we are a family that is too long together, anxious to get back home. But some of the subjects we talk about lead us into heated arguments about politics, particularly between Rene and myself.

At a McDonalds (yes a McDonalds!) we argue about interpretation of Hans Prinzhorn text. We are sitting at a table eating when Hagai insists that we should take all available time to work, which means interpreting the poster that he and Rene created. The waitresses (middle aged women) are snippy and do not have the right timing for making french fries (mine are mushy). Hagai had spilled a whole coke, and the waitress tells me I owe money for the cream for my coffee! Apparently Mc Donalds hasn't taught the "service with a smile" induction in Germany yet. Rene tells me that Prinzhorn was a Nazi sympathizer who pathologized art, but my reading of him had told me the complete opposite. Words are difficult also to translate as there is not only the usual language barriers, but language that is phrased in the special language of the Third Reich. When we can't agree about Prinzhorn, Rene says, "Ok, believe in your Prince!"

Later in the car we talk about partnerships and joining forces with the enemy. My own belief is that in order to learn about our differences, even people with total differences need to talk to each other and dialogue. Rene wants to know whether I would talk to the Ku Klux Klan. I tell him he is a purist radical who winds up not listened to.

It is obvious that Rene and I will never agree on some things. He believes that some things are simply black and white. When you see them you have an obligation to them. No in-between. I do not believe anything is black and white, and that we all can learn and grow from each other. Separatist politics are not acceptable to me. We continue to talk for a while but then are silent.

The last few hours are not fun, and I have misgivings about being here. Arriving home in Berlin helps, and a night's sleep, and a new day.

August 3 we prepare for leaving for Hamburg, and there is constant activity to get things ready including talking to press. We leave for Hamburg on August 5.