This will be the first in a series of messages by Gayle Bluebird, U.S.A. that will catalog the tour that is being made in Germany 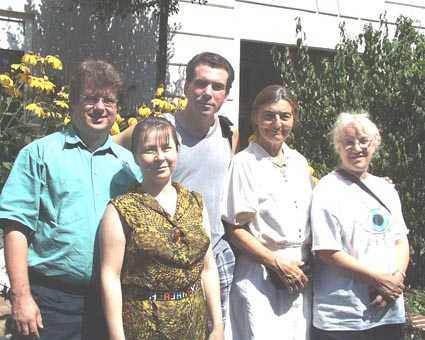 We are a group of five people, Rene from Germany, Joanna from Poland , Hagai from Israel, Elin from Norway, and myself, Bluebird, USA.

The purpose of the tour is to visit areas where exterminations took
place in hospitals located in different parts of Germany. The tour will
culminate in Hamburg on August 5-8 where the World Psychiatric
Association is meeting. A four day counter convention and protest will
be held near the site of the main conference and includes films and
speakers who will speak about Euthansia killing of over 200,000
undesirables including "mental patients" from 1939-1947. The group who
conducts the counter convention objects to the conference being held in
Germany, as Psychiatrists have not been held accountable for these
crimes or even acknowledge that they occurred.

This concept has support from a number of known figures who agree that
the art belongs to the Berlin ex-patient organization, The Bundesverband
Pszchiatrie-Erfahrener(the organization to which Rene belongs). The
blueprint for this project is quite exciting.

Some of our tour is pleasure. We went through the Symphony Hall and
were impressed by it's ability to seat 2,300 with every seat looking
directly down at the orchestra from multi-level seating in the round.

We went to several recognized museums, but none impressed me more than
the one of Kaethe Kollwitz, whose works were of working mothers and
children.

Rene took us to two different psychiatric hospitals. One of them comes
with an interesting story. Charite Hospital has a small building among
all of its impressive buildings for psychiatric patients. I was first
struck by the fact that we walked through many long hallways with not a
soul in sight. Rene points out a front room (now locked) which was the
site of a demonstration by his organization. They went into the room
and wrote the name of Gert Postel, who was a successful imposter doctor
psychiatrist who managed his facade for over 8 years on and off. Rene
said that he was quite impressive but discharged many of the patients
who incidentally were not re-admitted later. This is a sketchy story
that can probably stand some fill-in, but Gert's name was replacing that
of Carl Bonhoeffer, a well known figure to psychistry in Germany, and
for whom a statue was placed in his honor outside of this hospital. The
statue was be-headed and his placque on the wall removed.

At the time we are there, there is a certain eeriness present. The
stories, the quiet. No one telling us to leave. No one asking for our
reason for being there. And where were the patients. We finally see a
door that had open windows, with patients sitting in the hallway.

I will write more about this later. Getting late. We're off to Brandenburg tomorrow. See attachment of one of the documents we looked at today.

Reply at this address:

Here is a poem by Elin:

My reactions become diagnosed
to make the basis for
what treatment I shall receive
That I see when I read my record
written by the professionals
who call themselves authorities:

The Doctors of Psychiatry

How can in any way also in words
anyone get the help he or she needs
within this system?