We leave Naumberg in the morning after staying at the youth hostel. I must say that even after one night I fell in love with the concept of youth hostels where there are people gathered from everywhere. At this hostel there was a Bahai gathering taking place. Elin and I stay up in the evening listening to music played by a German self-taught musician. The musician's aunts are visiting from near Orlando, Fl. Conversation happens easily, whether language is understood or not. I make this point, only because we can all decide to travel this way. Traveling at hostels has its own political statement! 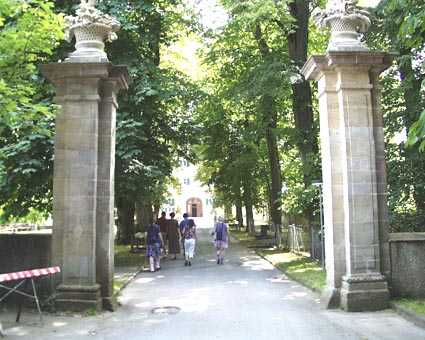 Upon arrival, we are told that the director who was to receive us is away in Stutgart for the day, consequently, there is no one to take us on tour. Rene and I have differing speculations as to whether this is intentional. My list of reasons include the fact that we did not call the day before to confirm, that the person may have forgotten, or had more pressing matters to attend to. This is also a location where there is not a guide paid to run the museum for tours. Nevertheless, Rene may be accurate. We were stood up!

The buses delivered persons twice a week and took different routes to arrive so as to shield the activity from the community. Nevertheless there were rumors. The mayor did become aware but did nothing about it. This community in particular had a religious base, and exercised some moral judgment.

We look at several quotes with individual versions of interpretations from people who were at the site:

A patient states: "Other people told me that the number on my back meant that I would be killed. The meaning of the number was clear."

A nurse states, "My job is to bring people to the reception room and to give files to the office staff. Out of these files the persons are checked for their personalities. My duty is to take off the clothes."

There is a quote from a soldier, which is also very matter of fact, and then a story of Maria Issler—a typical story of a woman who is an unwed mother of 2 children. She is described as a "cleaning devil." She stays at home and helps her father on the farm, but she is argumentive. In the village, "she gets very angry", "she has cleaning mania." Her second daughter is born in 1934 at which time she became angry, "unmanageable" at home. She was taken out of the house to an institution where she was sterilzed, later brought to Grafenick, and killed.

Forced sterilizations were common. During the years 1934-1937 197,419 persons were on record as having been sterilized in Germany. It is stated that this figure is not accurate, as there were many more persons sterilized that went unrecorded. Sterilizing people was not limited to Germany, but may have been done in the United States?? Perhaps some of you from America know our own history on the subject. As a student nurse, it seems I remember discussion, but do not remember details. It is amazing how much people accept barbaric actions when presented as normal procedure. Over and over, we are told by different speakers that these acts were committed by "normal" people. No one thought they were doing anything wrong, including nurses, social workers, etc.

Reading and hearing about women's stories is frightening. In today's world (I hope) there would be the possibility for Maria to ask for help, for the truth of her story to be known, and to remove herself from the situation. Most of us would agree that she probably had an abuse story to tell, either sexual or emotional. It is sad that we will never know the true story of Maria.

In 1949 several trials were held in which three perpetrators got 8 1/2 years imprisonment collectively.

Since 1947, the institution was opened by the church for the old and handicapped. The institution is one way the church can make atonement and be forgiven for its complicity, a place to heal conscience and make restitution to persons whose lives were lost.

In 1962 a memorial was created and a commemoration was made at this site. 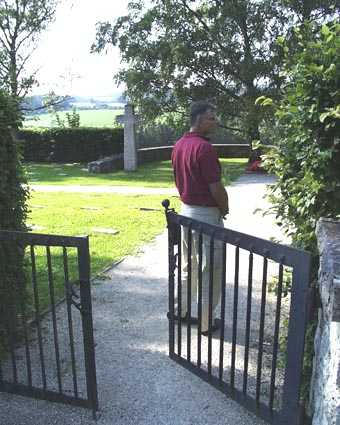 The memorial at Grafenick is particularly pretty. 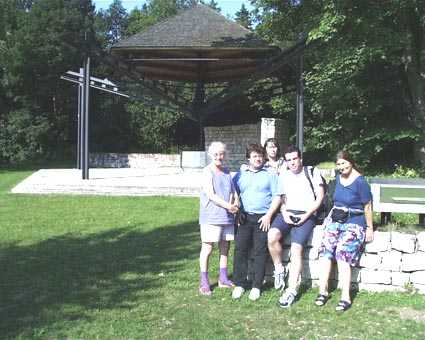 We all get together and eat food that we brought—a picnic next to this memorial site. We are able to laugh a little and talk about other things.

At night we stay at a youth hostel in Stutgart and walk through the town square that surrounds a beautiful lake with swans. Everywhere there are signs of America: McDonalds, ice cream cones (very popular), pizza, stores with all kinds of American goods. Hagai goes his own way. Elin and I sit outside a restaurant where a small band plays pop music, most of it American. I try to get German food, but what they have is sausages and bread, crepes that do look tempting, but I settle for filafel. Oh well! There is also dancing which is fun. The youth hostel sits high on a hill which requires a walk up three long sets of steep steps to get home. I love the hostels but don't like the climbs to get to them.