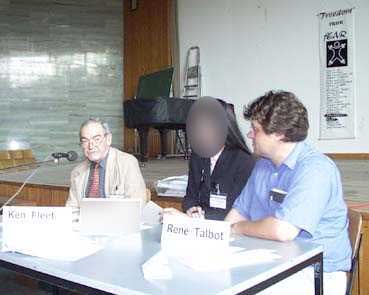 Do we need a Russell Tribunal
to defend the human rights of psychiatric patients?

The Bertrand Russell Peace Foundation has been approached by the organisers of the Foucault Tribunal to offer its moral support and endorsement to a Russell Tribunal on Human Rights in Psychiatry.

There has in many countries been increasing concern about the rights of persons involuntarily detained in mental hospitals, and about the use of drugs and other instruments and procedures designed to induce conformity.

How far is the treatment of those who are deemed to be mentally ill in so many Western societies consonant with the Universal Declaration of Human Rights? What measures are necessary to ensure that the human rights of psychiatric patients are safeguarded? How can we prevent procedures which are contrary to human rights?

There have been four previous Russell Tribunals. Different panels have considered War Crimes in Vietnam, Repression in Latin America, Freedom of Opinion in West Germany, and the condition of the American Indians.

In the past, the Russell Tribunals have brought together distinguished public figures from many walks of life to examine testimony trom experts and first-hand witnesses. They have been able to interrogate these witnesses and arrive at conclusions which have sometimes had a significant influence on public opinion.

The proposed tribunal will be autonomous and self-sufficient. It will seek to convene its first session in Berlin in the year 2000. The Russell Foundation hopes that all those who are concerned with psychiatric treatment, either as medical practitioners, patients, victims or concerned citizens will support the Tribunal by offering relevant testimony, whether written or oral, for its consideration. The policy of the World Psychiatric Association has been subject to particular criticism, and for this reason its members are invited to present whatever evidence they deem relevant to the Hearings.