The facility continues to be a psychiatric hospital which serves a population of 400. We learn later that there is one locked ward ( a forensic ward with 100 people) mostly with drug and alcohol problems, and that only a small part of the population has psychiatric problems. A few patients have been here for years, but most of the old folks are placed in the community. The building where the euthanasia took place does not contain patients, but did as recently as a year ago. This location had been a hospital before 1940, was used as a gas chamber during 1941, during which time there were no patients, but started again to take patients in 1942. 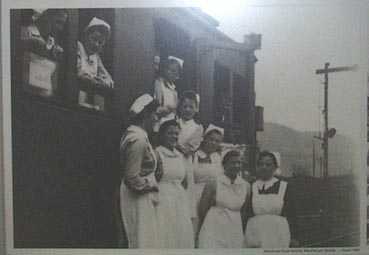 We do not review the killing procedure again, as basically the steps are the same, Ms. Gabriel explains that busses came from several places up to 70 Kilometers away. They came to a garden garage, which we can see from the window, where there was an overhang so that people would not be seen entering by anyone. Between January to August 1941, 10,500 persons were killed here.

Ms. Gabriel points out that although the gassing of individuals stopped in August of 1941, it did not mean that the killing stopped. Between 1942 and 1945, there were over 5,000 persons killed by drugging using the drug scopolamine. These bodies were not cremated, but placed in mass graves.

We talk about whether doctors come here for training, as it is obvious that groups come often. While we are touring there is another group behind us led by a Catholic nun. "Doctors do not come, It is difficult for them," states Ms. Gabriel. She states that doctors working during a last semester take a course on "Working Medicine" which includes what is happening in the working place that causes "mental illness", and that during this course there is a discussion of ethics covering the subject of euthanasia, but she feels it happens too late. (This is one of the few times that a guide gives a personal opinion). They have asked for the course to be given earlier but are told by professors that they cannot fit this into early curriculum as the curriculum is already set.

Approximately twice a year, seminars are organized for doctors, an academy, spring and fall, but there are only 10 doctors who attend each session. They begin with a focus on art, and the value of art in order to gain their attention.

In Frankfurt, she tells us, several medical students revealed in recent years that they had some preparations, meaning "brains," that were thought to be brains from the time of euthanasia. There was a ceremony in this regard which was written about.

We look at photos of 14 victims who were part of the second phase killing (those by drugs). The photographs of first phase victims are held in Berlin (the same archive building that we visited earlier). 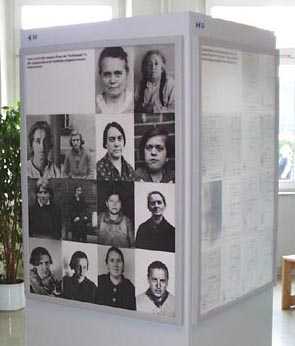 A Dr. Adolph Wahlman, was Chief of the hospital while these actions took place during the "second period." Ms Gabriel is quick to point out that he was a church member as well as choir director. He was sentenced to ten years in jail after the war and when he came out, died a short time thereafter.

We are shown an old poster describing a film called, "Ich Klage An" ("I Accuse") a propaganda film that was made in Berlin in 1941. The film had several scripts brought to the people to sell them on the euthanasia program. The Director was well known, Wolfgang Lieberneiner, and the producer, Hellmuth Ungers. The film was shown only a short time. We talk quite a bit about this film trying to find out if it is still available for showing, to which we are told mixed answers. The answer seemed to be no. The "stories" told on this film includes a part with a doctor who kills his wife because she had multiple sclerosis and is brought to trial. He was exonerated in the film. Another portion shows a chlid with convulsions with the parents asking questions. While it was difficult to determine exactly the graphics of these scenes, it was obvious that the average person was being convinced that "mercy killing" was justified in certain circumstances.

Hagai points out that there were American made movies such as "I Walked with a Zombie" (1943) that also made these points with a Hollywood touch. As I don't make it a habit to go to such films, I wouldn't remember. Anyone remember these movies?

Our discussion turns to the subject of Memorials. Hagai wants to know if it would be possible for a memorial to be created by us to honor these victims. Rene adds that Dr. Hoffman had remarked that there were no memorials created for the victims of euthanasia. Ms. Gabriel is not very enthusiastic when she states, "We don' t have any projects like this at the moment." Her agreement to bring the question to her committee did not have much promise attached to it.

Joanna asks a question about community knowledge and attitudes. We learn from Ms. Gabriel that this hospital in the West is very progressive and far ahead of hospitals in the East. While we may have learned one thing from persons in the East, it is different here. According to her, the west has "Reformed Psychiatry" in which there is an emphasis on individualization and community integration. The East has a high rate of "right wing" youngsters and a high rate of unemployment. While persons in the east have little knowledge about this issue, the West is more informed about it. Ideas for "normal people" meaning normalizing psychiatry (my interpretation) she explains, is just starting in the East.

We leave Ms. Gabriel, asking her whether we can use an electrical plug to set up our computer. Rene has been determined that it would be an easy feat to set up the computer in almost every location. I generally am a skeptic to these endeavors, but nevertheless, while Rene sets up the car with the computer, Hagai, Elin, and I walk up long steps to a graveyard and memorial site. 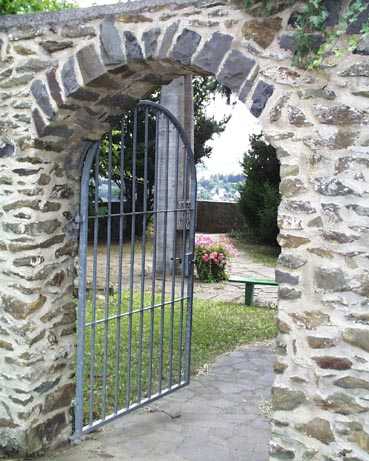 Church bells ring. It is 2:15. The amazing thing about churches is that only the bells ring at intervals. There are not people seen leaving or entering a service. Except for a Russian Orthodox Church we visited earlier in the morning on our way to Hademar, we have not noted any other services. Which, by the way, I tried to enter the Russian church, but two men engaged in very tight conversation, look at me in my shorts, and say, quite with German authority, "This is a church," and they point to my shorts with indignity.

And alas, Rene discovers he cannot use the computer because of an in-hospital telephone network. He doesn't give up for a while. The rest of us find a hospital cafe which is serving Sunday patients and relatives. We order the usual ice cream cone, although I could have ordered sausage and potatoes, No thanks. There was a beautiful looking cake sitting in a display, however.